Cataract surgery is an operation to remove your eye lens when it is cloudy. The only way to remove a cataract is with surgery. Your ophthalmologist will recommend removing a cataract when it keeps you from doing things you want or need to do. 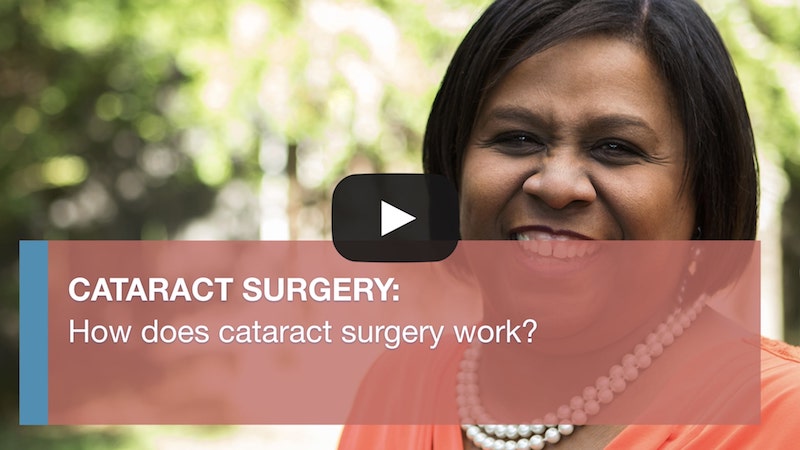 How does cataract surgery help you?

When considering cataract surgery, keep these questions in mind: 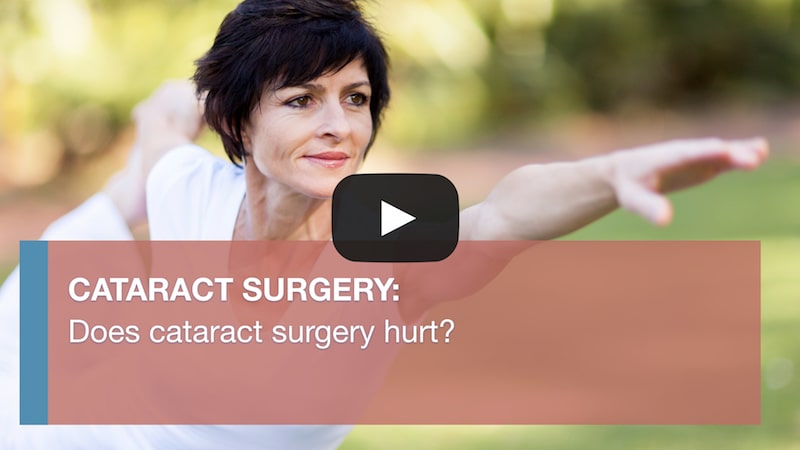 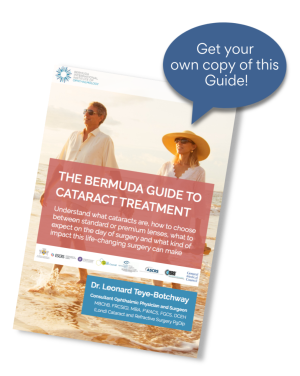 OVER 60? MOST BLINDNESS IS PREVENTABLE

How does cataract surgery work?

Cataract surgery today is typically performed using a microincisional procedure. To the patient, this means minimal discomfort during or after surgery, a more speedy recovery of vision, and reduced risk of induced astigmatism. This means less dependence on glasses afterwards.

Below, we’ve detailed the major steps of cataract surgery using a microincision procedure, phacoemulsification (ultrasonic cataract removal), and a foldable lens implant. This type of procedure is considered state-of-the-art for cataract surgery today. The procedure demonstrates basic principles only, however, and eye surgeons use many variations of the general theme, even from one case to another, depending on the type of cataract being removed.

The most commonly used cataract incision is about 3 millimeters in size – just about one-eighth of an inch! Because of the careful construction of this incision, and its small size, the incision is generally self-sealing. This translates to a “no-stitch” type operation.

The surgeon then creates an opening in the capsule, which is a micro-thin membrane surrounding the cataract. This procedure, called capsulorhexis, requires extraordinary precision since the capsule is only about four-thousandths of a millimeter thick! This membrane is actually thinner than a red blood cell and the surgeon must delicately remove the capsule while manipulating instruments within the anterior chamber – a space only 3 millimeters deep!

Phacoemulsification is the aspect of the procedure in which ultrasonic vibrations are used to break the cataract into smaller fragments. These fragments are then aspirated from the eye using the same instrumentation

The surgeon may elect to create grooves in the cataract, and subsequently break the cataract into smaller pieces using the phacoemulsification tip and a second instrument passed through a smaller “side-port” incision.

Once the denser central nucleus of the cataract has been removed, the softer peripheral cortex of the cataract is removed using an irrigation/aspiration handpiece. The posterior, or back side, of the lens capsule is left intact to help support the intraocular lens (IOL) implant

The intraocular lens is often folded and passed through the tiny incision where it is opened (implanted) inside the “capsular bag”. In this illustration, the lens is being inserted via an “injector”. This is an instrument designed to help keep the incision size small while allowing implantation of a 6 millimeter lens through a 3 millimeter (or even smaller) incision!

The IOL is shown here implanted within the “capsular bag” where it is neatly centered. The springy “arms” of the IOL, known as haptics, hold the lens implant within the capsular bag. The IOL does not generally require sutures to remain in good position.

This Lateral view of the IOL implant shows the lens within the “capsular bag”, which is the desired location. This position is the same as that of the natural lens (cataract) of the eye and, therefore, is generally tolerated best and provides the most optimal visual results. At this stage, the cataract operation with IOL implantation is complete.

What to Expect During Surgery?

Modern cataract surgery is performed almost exclusively on an outpatient basis. Most patients will be asked to arrive at the surgery center about an hour prior to surgery. Prior to surgery, a number of eye drop medications will be applied to the eye to prevent pain, to reduce inflammation and the risk of infection, and to fully dilate the pupil.

During surgery, most patients remain fully awake, however, mild sedation may be used depending on physician and patient wishes. The patient is asked to lie still during surgery and, if the procedure is performed with topical anesthesia, the patient will usually be asked to look toward the light of the operating microscope.

Surgery is usually completed in just 20 to 30 minutes. Patients are asked to remain still during the procedure and to inform the surgeon if needing to cough or otherwise move for any reason. Once the surgery is complete, the patient will be briefly monitored, post-op instructions given, and in most cases, the patient may be discharged to home within an hour.

What to Expect After Surgery?

After discharge from the surgery center, patients will usually be asked to return for a follow-up visit later that day or the next day, however, this will be based on individual circumstances. Also depending on the type of incision and surgeon preference, some patients will be asked to wear a shield over the eye, particularly while sleeping.

The eye should not be rubbed, or pressure placed directly on the eye through the eyelid, during the first few weeks following surgery. Eye drop medications will be required, usually consisting of antibiotic and anti-inflammatory medicines.

These will often be tapered off during the first month after surgery.
The best vision may not be obtained until several weeks following surgery, but individual results vary considerably, depending on many variables.

The great majority of patients may resume normal activities on the day of or day after surgery. Activities such as reading, watching television, and light work will not hurt the operated eye. Most surgeons arbitrarily recommend waiting 4 to 6 weeks before new glasses are obtained. This allows the eye to achieve considerable stability from a refractive standpoint and, therefore, the glasses prescription should be accurate and relatively stable.

Many patients are surprised at how clear their vision is after cataract surgery. Some patients may have better vision than they ever did before cataract surgery. Furthermore, depending on the degree of refractive error (need for glasses) prior to surgery, many patients will be much less dependent on glasses for far vision than they were before surgery. Patients will often notice that colors are brighter and more brilliant. The results are often dramatic.

Though cataract surgery is one of the most successful procedures in all of medicine, complications may still occur. Potential complications range from devastating visual loss to minor inflammation in the eye following surgery. In general, the risk of severe visual loss is very rare, but may occur as a result of infection or bleeding inside the eye, or even retinal detachment, which may occur months or years after a perfectly successful cataract procedure.

Most complications are minor, such as swelling of the cornea or retina, increased pressure in the eye, and droopy eyelid. These complications usually resolve with medications and continued healing time.
Over 98% of cataract surgeries are successfully completed without surgical complications, and more than 95% of patients have improved vision.

Those patients whose vision fails to improve often have underlying ocular disorders, such as age related macular degeneration (ARMD), diabetic retinopathy, and other conditions. In some cases, these patients may benefit from other procedures or from low vision aids.

Latest news from your eye doctor in Bermuda

We regularly share new videos and blog posts for our Bermudian patients about common eye questions and concerns. You can subscribe at the bottom of this page to receive the latest updates.

Because of the anaesthetic eye drops we administer before and during a cataract operation, the treatment does not hurt. Most patients are very comfortable during the procedure.

What are cataract symptoms?

Cataract symptoms start off with blurred vision, distortion and difficulty driving at night. As cataract symptoms progress, they usually interfere with the patient's normal life.

What are the cataract surgery risks?

Cataract surgery is the most commonly performed eye surgery there is. Because of technology and advanced techniques, cataract surgery risks have a very low chance of occuring.

CALL TO ASK A QUESTION OR BOOK YOUR ANNUAL EYE CHECK